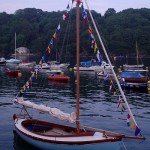 Since opening the workshop in 2003 here in Fowey, Cornwall, we have nearly always had a new boat on the stocks, ranging from an 18′ Murray peterson designed double ender ‘Bluebelle’, planked in Alaskan Yellow Cedar,  on an Oak backbone, with a Beta Marine 13.5hp engine from Fowey Harbour Marine Engineers,  sails and cover by Mitchell Sails in Fowey 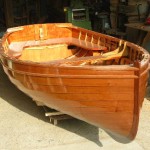 The 11 foot Mahogany on Oak Clinker Rowing boat  ‘Carlotta’ was a copy of an older boat, built to scull over the stern, so the buoyancy provided there would enable a small outboard to be used, without the bow lifting too far when under way, 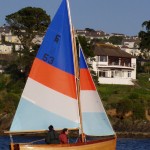 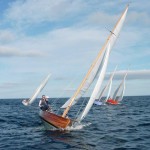